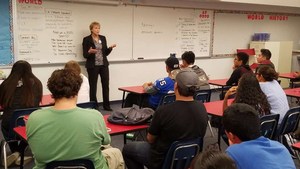 The honorable Barbara Major spoke about the U.S. Constitution to Ms. Copeland's AP Government and Politics students today for National Constitution Day.
Magistrate Judge Major works within the U.S. District Court for the Southern District of California, which covers the entire region between the southern U.S. border, San Diego, Imperial, Orange, and Riverside Counties.  She was formerly an appointed Federal Criminal Prosecutor.
Judge Major provided useful insight to the students about the differences between federal court jurisdiction, common cases seen in the federal courts, and the diversity of legislation between the state law and the federal law and between states.
Orange Glen High School thanks you for taking your time to speak to our students about the judicial branch of the federal government and the role a federal magistrate judge plays in ensuring people's protections under the U.S. Constitution.